On Thursday 16 May 2019, Cllr Beryl Hunwicks was elected as Woking Borough's 46th Mayor at the official Mayor-Making Ceremony, which took place at the Civic Offices during the Annual Meeting of Woking Borough Council. 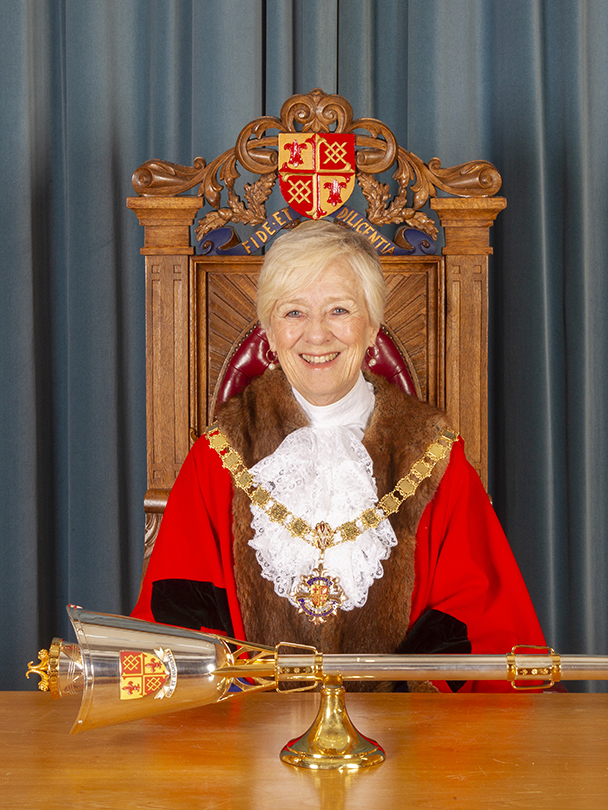 London born Beryl moved to Woking with her family in the early 1970s and she has lived for most of that time in Horsell.

Beryl became involved in local politics in 2007 after being nominated by a friend to stand for ward councillor: “I had no idea what it meant when I started, I simply knocked on every door in Horsell to meet people.” explained Beryl.

Once elected, Beryl embraced the role serving many portfolios on the Council’s Executive Committee including environment and sustainability, health and wellbeing, waste and recycling and community safety.

Talking about her roles, Beryl said: “I’m most proud of our work to encourage residents to recycle their waste. Since the introduction of wheelie bins, Woking’s waste collection plan has evolved enormously. The amount of items that can now be collected at the kerbside is quite extraordinary by comparison to many other authorities. We have a lot to be proud of in Woking.”

Looking forward to her Mayoral term, Beryl said: “Our voluntary sector is nowadays needed more than ever, they truly are the unsung heroes of Woking. I am excited about getting a closer look at the work undertaken by these groups. Woking is an inclusive, diverse place and I can’t wait to attend the different events and meet people of all ages and backgrounds.”

As a former teacher she also hopes to gain a new perspective on the role: “I love seeing the world through the eyes of children and am keen to know how they view the role of Mayor!”

Beryl is an active member of Welcome Church, along with husband, Alan. “Between that, my work as a councillor and life as a grandparent I don’t have much free time!” said Beryl. “However, I wouldn’t have it any other way, I love being busy and giving back to the community that has given us so much over the years.”

Her message to people across the borough is simple: “Every person whatever their age, beliefs or circumstances should have a voice. It's by engaging and communicating that all of us can make a positive difference to the place in which we live. I look forward to seeing the wonderful work that is being done in the borough during the year.”

During her Mayoral year, Beryl has chosen to support Woking's domestic abuse charities, Your Sanctuary and Women’s Support Centre. She explained: “These are charities that I believe work in synergy with each other. Both are mainly services for women, although Your Sanctuary is not exclusively so, which help women through crisis situations which gives hope to whole families in distress.”

The Deputy Mayor of Woking for the 2019-2020 municipal year is Councillor Saj Hussain, the current Conservative member for Knaphill.

Any correspondence should be sent to the mayoral and civic event support officer, Pauline Jackson at the Civic Offices, Gloucester Square, Woking, Surrey GU21 6YL.